If indie developers ever feel a little lonely working on mobile apps and games, they should know they’re part of a worldwide group that numbers 8.7 million people, according to Evans Data. The Santa Cruz, Calif.-based firm recently released its Worldwide Developer Population and Demographics Study, which culls data from the World Bank data center, CIA World Factbook, the U.S. Census and several other sources. 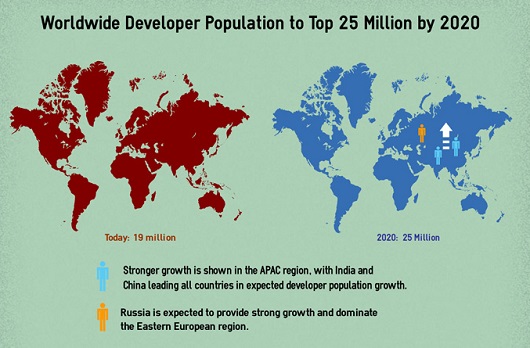 The research firm projects the worldwide software developer population to grow from 19 million today to 25 million by 2020.

“People who think that mobile developers are only developers who sell apps through app stores are seeing just a small part of the overall picture,” said Janel Garvin, CEO of Evans Data Corp. “Mobile development is becoming ubiquitous thanks to the prominence of mobile devices as the preferred client in both enterprise and consumer environments. And cloud is the perfect enabler for mobility in these realms as well as in related Internet of Things implementations. We see no slowing of mobile development anywhere in the near future.”

It’s no surprise that many developers are focusing on business apps, particularly if they come from a more traditional software development background compared with the hobbyists or those who see creating consumer apps as a sideline. What might be more difficult to track–but what would be quite valuable–is what proportion of those who start out as consumer app and mobile game makers shift into the enterprise side.

Although Evans is offering the big picture around developer demographics, the details around those who are employed by big firms vs. those who are entrepreneurs–and those who see this as a profession versus those who are doing it for the love–is incredibly complex. Those providing the best developer tools, cloud-based or otherwise, are probably not targeting that 8.7 million as a whole, but looking at specific niches. As for consumers, they probably don’t care a lot about developer demographics. They just want their apps to work–and to be fun.

This report and article perfectly supports our W07-Opportunity forecast on importance of code education.