The digital content market surged 30 percent between 2012 and 2013, with apps driving much of the growth, according to a report from IHS and App Annie. The joint research study also looked across digital games, music and movies. 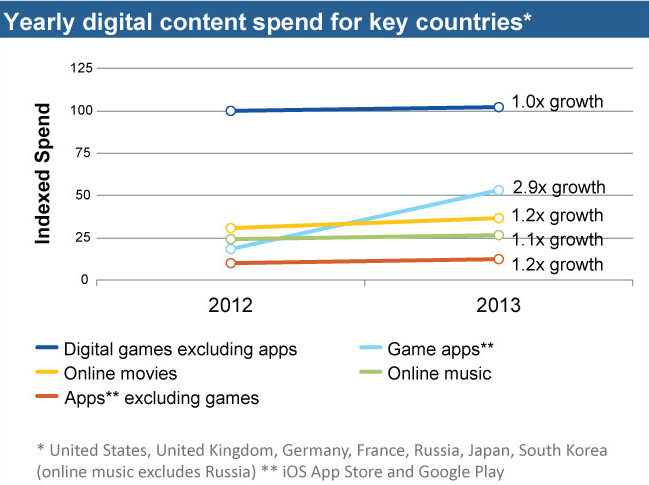 Mobile gaming spend more than doubled over 2013, with growth particularly strong in Asia, according to the IHS and App Annie study.

“Apps deliver, but do not charge for, content. Movie subscription and transactional services favor a direct billing relationship with consumers, and one that is outside the 30 percent share of spend taken by app store owners,” the report says. “With Apple and Google offering their own movie services, an app that wishes to use in-app purchases to charge for content would be at a significant price disadvantage in order to maintain a healthy margin.”

Though monetization is always a challenge for developers, the report shows that apps may stand a greater chance of finding revenue if they are less focused on replicating content services like Netflix or Spotify and offering complementary content instead. For example, the report notes the growing popularity of games that tie in to blockbuster movies, or discovery services, which have proven particularly successful in the digital music space. In many respects, the report said, the role of apps is not merely delivering content like music or movies but helping to build the audience for it.

This report is another proof of importance of supporting code education for the future digital content market growth.