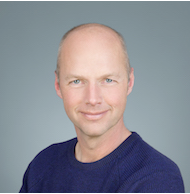 About Udacity:
Udacity is where lifelong learners come to learn the skills they need, to land the jobs they want, to build the lives they deserve.  Udacity’s mission is to democratize education through the offering of world-class higher education opportunities that are accessible, flexible, and economical. Virtually anyone on the planet with an internet connection and a commitment to self-empowerment through learning can come to Udacity, master a suite of job-ready skills, and pursue rewarding employment. Their products include access to resources and, ultimately, degrees, called Nanodegrees.  Some of Udacity’s resources include catalogues of courses, career resource centre, access to hiring partners (Google, Facebook, IBM, etc..), scholarships and Udacity talks.

Business Insider reports that Udacity began as an “experiment in online learning, when Stanford instructors Sebastian Thrun and Peter Norvig elected to offer their “Introduction to Artificial Intelligence” course online to anyone, for free.” With over 160,000 students in more than 190 countries enrolling, Thrun realized the massive potential to educate at a global scale,  and Udacity was founded to pursue a mission to ‘democratize education’. However, according to Thrun in Business Insider, the completion rate was extremely low.  So Udacity underwent several iterations and pivots before understanding what was truly needed – career enhancement and advancement through skills, versus just the skills. Udacity wants people around the world to ‘be in demand’.

Thrun’s Bio — (wiki summary plus Udacity bio)
Sebastian Thrun (born May 14, 1967) is an innovator, entrepreneur educator, and computer scientist from Germany. He is CEO of the Kitty Hawk Corporation, chairman and co-founder of Udacity. Before that, he was a Google VP and Fellow, a Professor of Computer Science at Stanford University, and before that at Carnegie Mellon University. At Google, he founded Google X and Google’s self driving car team. He is currently also an Adjunct Professor at Stanford University and at Georgia Tech.[5]

Thrun led development of the robotic vehicle Stanley[6] which won the 2005 DARPA Grand Challenge, and which has since been placed on exhibit in the Smithsonian Institution’s National Museum of American History. His team also developed a vehicle called Junior,[7]which placed second at the DARPA Grand Challenge (2007). Thrun led the development of the Google self-driving car.[8]

Thrun is also known for his work on probabilistic algorithms for robotics with applications including robotic mapping.[9] In recognition of his contributions, and at age 39, Thrun was elected into the National Academy of Engineering and also into the Academy of Sciences Leopoldina in 2007. In 2011, Thrun received the Max-Planck-Research Award.[10] and the inaugural AAAI Ed Feigenbaum Prize. Fast Company selected Thrun as the fifth most creative person in the business world.[11] The Guardian recognized Thrun as one of 20 “fighters for internet freedom”.[12]

Attributes of Thrun, his team and board of directors:
Characteristics of Thrun include high educational achievement, though this is not necessarily tied to success as an entrepreneur as there are many entrepreneurs who have dropped out of college (Bill Gates, Mark Zuckerberg, Steve Jobs, etc…). However, his educational commitment informs his interest in making education accessible — which is the mission of Udacity. Critically important is Thrun’s vision for a better world, which is, frequently a motivator for entrepreneurs. They see a problem and fix it. They are change makers. His skills as outlined in his bio are outstanding – highly technical mind and recognized with numerous awards, but the most noteable attribute is the serial nature of his ventures, making him a serial entrepreneur.  And, at times, overlapping.  This is the mark of a busy and productive mind. (I suspect he is a marathon runner, too) and probably has low sleep requirement (LSR). 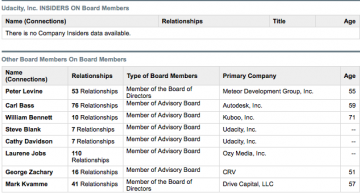 Finally, what I find interesting, but not surprising, is that Udacity has two board members, and many advisors.  The board members are two investors and include Peter Levine (Meteor Development Group) and Mark Kvamme (Drive Capital). This tells me that there is an intentional interest in keeping the equity minimally distributed and diluted.  To ensure the company’s growth is effectively planned and managed, there are several advisors from Autodesk, Kuboo, Udacity, Ozy Media and CRV.  With partners such as Google, IBM, Microsoft, Facebook, AT&T, I think an exit strategy will likely be acquisition by one of these partners.

I think Thrun is an admirable entrepreneur, inventor, and change maker.  He has an established track record for building vision and executing. What’s significant is his understanding of how important failing-fast is.  His ideas have taken years and many iterations to come to fruition, and failure is a necessary part of that journey. He’s definitely in my top 5 list of people I’d like to meet.