Jon Ellis and Kevin Gibson: Cofounder and director of Tutorhub

Although, one in four students have either a private tutor at home or attend a tutoring center, the majority of students either lack the funds or means to obtain tutoring. Tutorhub is an engine that connects the right tutor with the right student. Lessons are carried out through their state of the art online classroom. After each lesson, students are able to rewatch the lesson in order to better understand the material. What makes Tutorhub unique is that it is affordable and flexible. Lessons can begin at anywhere and anytime.

Together, Kevin and Jon make a great team. Kevin’s computer background and Jon’s accounting background enable them to run a profitable business that currently has 2722 tutors and 14162 students. In addition to tutors, Tutorhub also has four graphic designers and web developers as part of their team. Jon is interested in education and parenting issues and lives in rural North Somerset with his family. He found it difficult to find tutors for his children and this sparked the idea of running an online tutoring business.

I have been a tutor for over 16 years and my tutorials were conducted one on one at home. It had crossed my mind to run an online tutoring company but was uncertain if a market existed for this service and how to go about operating such a service. I am not much of an entrepreneur and would probably need a partner that is significantly more knowledgeable in the business aspect of running an online tutoring service. 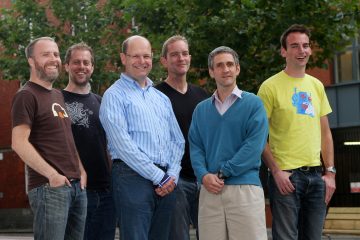 From left to right, we have Stefan Goodchild (graphic designer) and Jamie Dyer (developer), Jon Ellis and Kevin Gibson (founders), along with Ed Davey and Theo Cushion (developers).