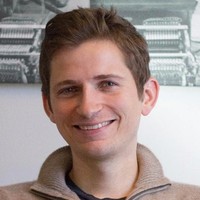 Riley Eynon-Lynch is the CEO and Co-founder of PearDeck. PearDeck is a Google app that creates and administers interactive educational slideshows. These slideshow presentations ask questions and can have students answering while they learn! PearDeck is an educational technology company offering a web-based application to K-12 schools and teachers. Pear Deck was founded in 2014 in Iowa City, IA. In December 2014, Peck Deck raised $500,000 in seed funding. That same year, the company was awarded the “New Startup of the Year” award at the Silicon Prairie Awards.

Riley Eynon-Lynch began his career as a computer scientist. He developed his first educational app called “Active-Grade” in 2010 and has since made PearDeck in 2015. He is passionate about education and technology and focuses on combining both to create meaningful learning experiences. There entire team bio is available online and clearly showcases how each member is a dedicated educator and/or supporter of educational innovations.

As someone who has used PearDeck in the past, I can say that a lot of time and effort went into the creation of this app. It works well and does a great job of presenting information and assessing students in a fun and engaging way.